The purpose of the competition is to write a program that can play a game. The objective of the game is to score the most points by locking units into place while invoking phrases of power. As input, the program will take a description of the initial game state. As output, the program needs to produce an encoding of a sequence of commands. The result of the program will be evaluated by executing the commands and computing a score. 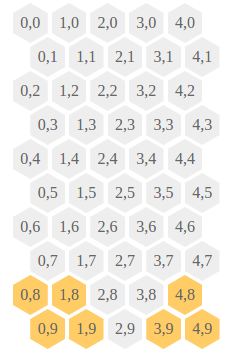 Example board of width 5, height 10.
The colored cells are full.

The game state has three parts:

The program will control units, one at a time, by issuing them commands. Each command is a single symbol selected from a fixed predefined set. Each unit is controlled until it becomes locked. When a unit is locked, the program is awarded points, the board may get updated, and then it will proceed to control the next unit from the source. The game ends if one of the following conditions occurs:

The game board consists of hexagonal cells arranged in rows, with the first row numbered 0. The height of the board specifies the number of rows on the board.

Each row contains an equal number of cells, specified by the width of the board. The cells in a row are oriented so that they have vertices up and down, and edges to the left and right. The first cell in a row is numbered 0, thus each cell may be identified by a pair of coordinates (column, row).

Odd-numbered rows are displaced to the right, so that the north-west edge of each cell is adjacent to the south-east edge of the correspondingly numbered cell in the previous row.

Each cell on the board is either full or empty. Each board specifies an initial set of cells that are full. These initial board configurations may contain useful information to contestants.

Example units.
The pivot is marked by a dot.

A unit is a non-empty collection of cells that are manipulated together, and a pivot point used for some commands. A unit is in a valid location if all of its cells are on empty board cells. Note that a unit's pivot point need not be on a board cell.

When a new unit is spawned (i.e., it emerges from the ether and comes under player control), it appears centered at the top of the board. More precisely:

If the spawn location is not a valid location for this unit, the game ends.

Each unit supports the following commands (as abstract syntax):

Issuing a command that would result in an invalid placement for the unit locks the unit in place without any movement. The members of a locked unit become part of the board, and the corresponding cells on the board become full. Locking units into place is one way to score points.

Important: the same unit cannot visit a location more than once. (The Old Ones do not take kindly to stuttering computations!) Issuing a command that would move all members and the pivot to locations that they have previously occupied is an error, and the program will score 0 points for that board.

When a unit becomes locked, the board is updated as follows:

When a row is cleared all of its cells become empty. Also, the cells from all rows above (i.e., with smaller numbers) are moved one row down. Note that this means that the cells in a row will move either to the SE or SW, depending on the row number.

There are eighteen phrases of power that can be invoked within a sequence of commands. Phrases of power are case insensitive (the fundamental forces of the universe are unperturbed by minor issues like capitalization). Points are earned for invoking and repeating these phrases, as described below.

The player scores points for each locked unit. There are three factors that contribute to the number of points that are won:

The points are computed according to this formula:

The sum of move scores for all locked units is denoted move_scores.

The player also scores points for invoking phrases of power. For each phrase of power p, there are two factors that contribute to the number of points scored:

The score for a phrase of power p is computed according to this formula:

The sum of power scores for all phrases of power is denoted power_scores.

Consequently, the total number of points earned for a board is:

As previously mentioned, issuing a command that would result in an error immediately ends the game and the player receives 0 points for that board.

Programs will be given JSON objects describing the game configurations and information on how many games to play using the following JSON schema (names that are in bold correspond to objects described in subsequent sections):

For each such JSON object, the program should play one game for each seed in the field sourceSeeds. Each of these games will be scored separately, and will be played using the same units, board configuration, and number of units. However, the order of the units will differ depending on the seed. Full details on how to order the units in the source are below.

Identifies a cell, either on the board or within a unit.

The order of the units in the source will be determined using a pseudo-random sequence of numbers, starting with a given seed. The unit identified by a random number is obtained by indexing (starting from 0) into the field units, after computing the modulo of the number and the length of field units. So, for example, if the configuration contains 5 units, then the number 0 will refer to the first unit, while the number 7 will refer the 3rd one (because 7 mod 5 is 2, which refers to the 3rd element).

The pseudo-random sequence of numbers will be computed from a given seed using a linear congruential generator with the following parameters:

Submissions should support the following command line parameters, which may be provided in any order:

The parameter -f may be provided multiple times, which means that the program should produce results for all of the given inputs.

If provided, the parameter -t indicates the execution time to produce the output for all problems. If it has not finished, the program will be killed after that many seconds. If -t is not provided, no time limit is imposed on the program.

If provided, the parameter -c indicates the number of processor cores available to the program.

If provided, the parameter -p is a phrase of power (for example, Ei! for the phrase given above). The parameter -p may be provided multiple times, once for each phrase of power the program should attempt to invoke in its output. As you discover more phrases of power, you can re-run the program with additional -p command line options; during judging (except for the lightning division), the program will be passed all the phrases of power.

The output of the program should be a JSON list, containing one entry per problem and seed, using the following schema:

The tag field is meant to allow teams to associate scores on the leaderboards with specific submitted solutions. If no tag field is supplied, a tag will be generated from the submission time.

The multiple possible choices for each command enable the embedding of phrases of power (described above) into command sequences to earn additional points (and help keep the flesh-eating darkness at bay).

Program evaluation will be done in two phases: the qualifiers and the finals. The qualifiers, which are additionally split into the lightning division and the qualifying division, will happen live during the programming contest. The finals will be conducted by the judges after the contest ends.

The finals will be conducted after the contest, and will determine the winners. The judges will build the finalists' programs and present them with a collection of problems that may be different from those used during the qualifiers. The resulting solutions will be ranked, and this ranking will determine the overall winners of the contest.

The qualifiers will determine the teams that will enter the finals.

During the contest, teams will have an opportunity to submit solutions to the qualifier problems. Each qualifier problem has its own leaderboard, where teams are ranked based on the solutions they have submitted for that problem. The score for a team is the average score of the latest submitted solutions for each seed of the problem, rounded down to the closest integer. So, for individual problems, bigger scores are better. Seeds without solutions, or that result in errors, score 0 points. In the event of a tie score, the team whose solution invokes more distinct phrases of power receives the higher ranking. Teams that tie with respect to both score and number of distinct phrases of power invoked receive the same ranking.

The teams that have the highest overall rank during the qualifiers will enter the finals. The programs of these teams will be evaluated by the judges on another set of problems.

Before submitting solutions, at least one competitor on a team must obtain an API token from the login server (davar.icfpcontest.org). The team must also be created on the login server. It is not possible to join an existing team using the login server; instead, one team member should create the team and add the email addresses of all the other team members.

Solutions are submitted using an HTTP POST to the submission server. One way to accomplish this is to invoke curl, as follows:

The variables referenced in the curl invocation are the following:

The URL in the curl invocation is the same as the submission URL provided in the web interface.

The source code should be submitted as a single .tar.gz file that should containing at least the following:

The Makefile will be used the build the program. The program should build by just executing make. The result should be an executable file called play_icfp2015, which will be used to compute solutions. This executable should support the required command line parameters.

The README should describe what you'd like the judges to know about your program—anything you can write here that will help the judges build the program and appreciate its cleverness would be appreciated! In particular, you may want to list the dependencies of your program, in case it fails to build in the judges' build environment. The judges will try to install additional dependencies, within reason.

When the judges choose to build a program, the build will be done on a standard Linux system running a recent Ubuntu flavor, with a standard set of development tools, plus any additional compilers or interpreters that might be needed. If the build requires a platform other than Linux, we will obtain and use it. We have at our disposal and expertise a wide array of systems, including those of Microsoft and Apple.

OGA takes the integrity of our systems very seriously. Any attempts to compromise the integrity of the submission server or any other contest infrastructure will result in disqualification (and more... serious penalties).